Daylily rust is actually spread by means of spores and in order for these to effectively grow they should remain at appropriate temperatures. The daylily rust actually requires warm temperatures and highly humid environment. Poor circulation can also support the growth of these spores. A temperature of about 15 to 30 Celsius along with 100% humidity creates a very conducive environment for the spores to quickly grow and germinate. Spore germination can occur in just several hours with just the right temperature, humidity and watering conditions. Daylily spores are know to survive for at least a month under normal conditions. 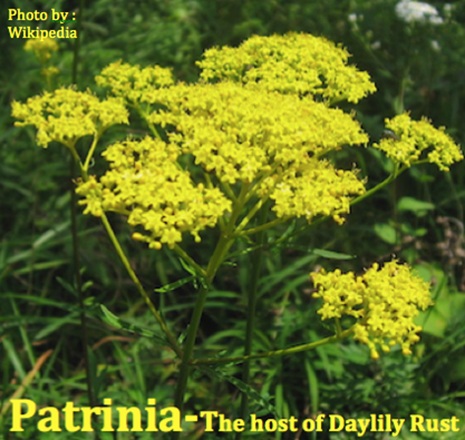 The host of daylily rust. Most people are not really aware of how the daylily rust actually forms on the plants. You should be aware of how these daylily diseases develop so that you could learn how you can prevent it from occuring. The Daylily Rust is also known as the Puccinia hemerocallidis and there are several stages that it needs to undergo before it could completely take over the entire daylily plant and be finally called rust. Not all the life cycle of the Puccinia hemerocallidis takes place on the Daylilies. Some needs to be in another type of Asian plant which is known as the Patrinia. The Patrinia is also considered as a perennial plant just like the Daylilies.

By using systemic and non-systemic fungicides, you can effectively prevent and control the existence of daylily rust disease on the daylily leaves by proper monitoring your daylily plants. Daylily rust is a problem fungus disease with a complicated way of existence so you should really see to it that you examine your plants regularly for every sign of the daylily rust disease. Once early signs of daylily rust are found, you should act immediately by managing and applying different fungicides to the plants affected with daylily rust as soon as it is noticed. Daylily rust can be controlled by treating your daylilies this means by cutting all your daylily plants down to the crown, don’t do this to often as it will weaken the plant (The crown is the white area between the leaves and the roots) stripping a few of the outer layers of leaves as well and bagging the rusty leaves and either burn or bury the leaves or putting the rust diseased leaves in a black plastic bag out in the hot sun for a few weeks this will kill or distroy the rust spores too, then once the daylily plant starts to grow protecting the new leaves, every seven to fourteen days, you need to spray the whole plant both sides of the leaves with (Yates Mancozeb plus) sulphur based fungicide and alternative use of (Yates fungus fighter) a copper based fungicide using the right measurements as indicated on the packet. The reason for the alternate use of the two different based fungicides is so that the plant doesn’t get used to the one based fungicide. Always use the fungicide 24 hours before rain or watering, this should put a film on the leaves and hopefully prevent daylily rust from entering the leaves, but you have to keep spraying the fungicide every seven to fourteen days. This fungicide is a non-systemic fungicide which does not penetrate into the plant tissue it just protects the daylily plant from fungus rust infection. This is how the non-systemic fungicide works.

It is best to use one of the sytemetic fungicides with the non-systemic fungicides together, some of these fungicides may need to be used with a wetting agent so that the products stick to the plant, it is best if you see your local agronomist about the wetting agents when you buy these products. You should also make sure that watering conditions are properly controlled to prevent the growth and germination of rust spores by watering your daylily plants early mornings and not in the evenings. I know we can’t control the weather but this is another way to help prevent daylily rust. Daylily rust spots looks very unsightly if it gets a hold on your plants. It is said if you experience hard frosts this will kill daylily rust. To eliminate the daylily rust weather temperatures must be zero degrees or colder, unless the spores overwinter in protected areas near and around the plant. But remember it only takes one spore spread by wind to land on your daylily plant other times of the year and you are back with daylily rust. Alternatively you can look for daylily rust resistant daylilies, extensive research is in progress to identify daylily rust resistant daylilies; some daylily varieties show more resistance to daylily rust than other cultivars whereby some daylily plants are more prone to daylily rust.