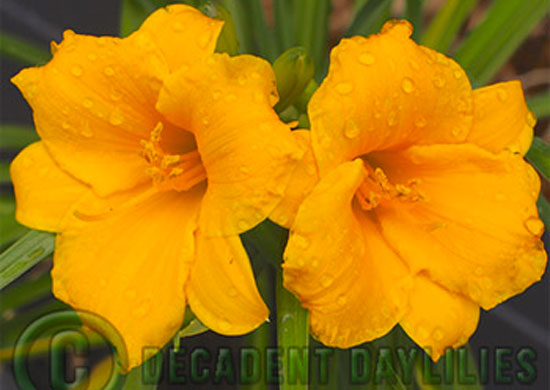 "AUTOBIOGRAPHY OF A DAYLILY"
Hi I'm Stel, Stella D'Oro to be precise and this is my story…….

My ancestors date back to 1977 when Stella D'Oro was first registered. I was born about seven years ago and I carry the name with great pride.

I am a daylily, not just any daylily, I am a diploid. My flowers are beautifully fragrant, golden yellow, approximately 2.75 inches wide with a tangerine throat; I am fertile both ways and rebloom constantly. Many have recognised my outstanding abilities and as such my ancestors were awarded by the ‘The American Hemerocallis Society' a ‘Stout Silver Medal' in 1985; this is the highest award a daylily can achieve.

It was a cool overcast day and like so many others like me, I was placed in a draughty position on a plant stand directly in front of the sliding doors of a Kmart Store. I had been there for a few months and was starting to feel rather depressed and homeless. My first year as an immature fan went quickly and I loved living on the farm but my welcome was soon worn out and I was merely handed over for a pittance, not a second thought about my feelings.

How would you like to be dug up, trimmed, suffering from dehydration, left to lie out in the sun until someone remembers to pick you up and take care of you? I thought I was going to be planted out somewhere or potted up but no I was placed in a bag with a label stuck on the front of me. How long did they think I wanted to live on the shelf for? Just because I am a dormant daylily doesn't mean to say I don't want to have a sense of belonging and a place to live.

The other daylilies around me didn't talk much as we were all storing our energy, waiting for someone to give us a new home. In Victoria daylilies weren't fashionable and hardly anyone showed an interest, we didn't even get a glance to be exact. If they only knew how great daylilies are, we are so tough, drought hardy and perfect for the lazy gardener.

I was beginning to think it was never going to happen but at last someone came near us, a female, her name is Patricia. I just called her Tricia and she was from Melbourne. We placed wagers with the other guys who if anyone was going to get lucky today, and who was going to be homeless for yet another day. It helped to ease the boredom. My roots were aching for some water and sunlight; I desperately wanted to leave this prison bag.

It was bliss, my first year was a bit rough as my new owner thought I could survive just on air, barely feeding and watering me, unless she remembered. Luckily it rained occasionally to help me survive the tough times. By the end of the first year I was well established, had a good three months sleep in the winter and then I started to really show my stuff. I flowered from spring to mid autumn, if it wasn't so cold in my new home I would probably still be flowering now in winter. Boy was Tricia impressed with me and so were her friends. They were amazed how much I flowered with such little care.

Things were good for the first couple of years but then she thought she would bring in some new blood, she was bored of me and wanted some more daylilies with different coloured flowers, sizes and shapes. Tricia had been surfing the internet and found so many other daylilies. Now I have competition but I wasn't going to let some new blood steal my thunder or space. The race was on.

I had multiplied quite well so Tricia decided to dig me up and separate my family from next to me. As sad as it was we did overcome the hard times and learnt to live with our new neighbours even though they were those fancy faced Tetraploid daylilies. They think they are so much better than us with their 44 chromosomes, they are just so egotistical. They sway and prance around with their large flowers, big eyes and bold elaborate edges, really, they make me so cross they don't have half the substance that I do and I don't melt in the hot afternoon sun. I'll show them who is better, performance and habit beats a pretty face.

Yes, I won, the others are in denial, I am the most floriferous and still to this day Tricia won't get rid of me as I keep on performing when the other aristocrats have a rest. Boy, they don't make daylilies like me anymore.

What's wrong with me, what more can I do to prove my worth! Even though Tricia loves me, she doesn't use me for hybridizing when she knows for a fact that I am fertile both ways. Tricia is always using those fancy tetraploids or the new hybrid diploids with those fancy ruffles and mid ribs. Talk about mean, she's so mean if she doesn't like you off to the compost heap you go, first scape of flowers, and if you don't have good branching, bud count or have a pretty face that's it you're on death row. Life as a daylily is really tough; we live one day at a time.

I guess I really shouldn't complain as I am happy in my home, (mind you I have to look after myself most of the time as the new arrivals always get fussed over and get all the attention and I get the scraps, grrrrr).

I have made a lot of new friends and we have been through a really tough year with the drought and water restrictions, it was really touch and go there for a while as thought I was going to lose a couple of my neighbours but they are on the road to recovery now; we just need a few good showers of rain and we will be 100% again.

Even though the others think they are better than me, secretly you and I know who the proven winner is.

Phew! I have survived another day.