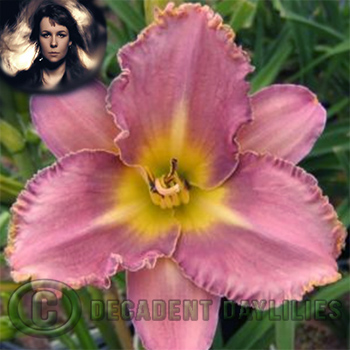 This daylily was named after one of the best female folk rock singers known as Sandy Denny. She was born on the 6th of January back in 1947. Her real name is actually Alexandra Elene Maclean Denny. Aside from being a famous singer, she is also known to be an impressive and soulful song writer. She has been known in the Britain music industry as the pre-eminent folk rock singer.

Before she started to enter her career in music, she began training as in the medical field as a nurse. As a young woman, she has already expressed her great passion for music through singing. At first, Sandy Denny’s parents did not agree on her pursuit of her passion for music. Her parents thought that it would really be difficult for Sandy to earn a living through music so she was asked to train as a nurse.

Later on, her passion for music and the arts continues to live on and she was able to earn a slot in the Kingston College of Art. In her school, she was greatly exposed with the folk culture and that is where she was able to get the inspiration on his focus on the genre of music that she will explore. While studying, she sang at folk clubs during the night were a lot of people have greatly witnessed her impressive talent.

Eventually, through her folk songs in club circuits, she was able to enter the recording industry and she had already started to make professional records in the middle of 1967. There came a time when she had to abandon her art course at the Kingston College of Art. While she was performing at one of the famous folk clubs in the area, one of the members of the band Strawbs, was able to notice her and unique and impressive vocal quality. Because of this, she was invited to become one of the members of the band. She was able to make one album with the band. Eventually, she decided to search for another band where she could explore her singing and most importantly, her songwriting ability more. In the search for another band, she participated in the auditions of the Fairport Convention where she was immediately accepted as a singer.

These are some of the essential details about Sandy Denny, a famous folk rock female singer who has made a great impact on the music industry.