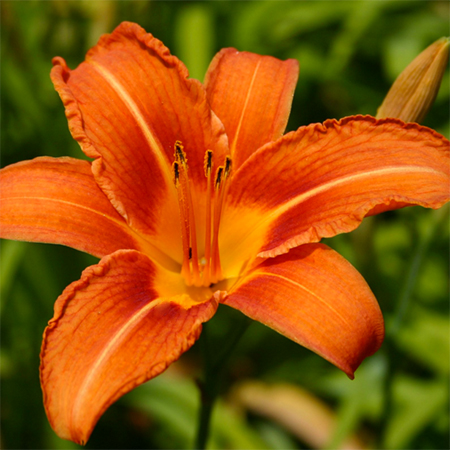 Edible Daylily (Hemerocallis fulva) also known as the Orange daylily tawny daylily, common daylilies, fulvous daylily, ditch lily or the original wild orange daylily. Today it is well known for growing everywhere along the sides of roads nation wide in the United States and Canada. The ornamental plant is native to Asia and is an infertile triploid and is famously known as the fast growing invasive daylily. H. Fulva tolerates heat and stress and difficult neglected areas with high humidity and rainfall and never rots. It will even flower in the shade and has low care requirements. The plant will grow in any soil and is a known fact that the plant is very vigorous and can over run your garden in no time. Because of its unique root system, it is best grown in a container. This daylily species is hermaphrodite by nature. Even though Hemerocallis fulva has both male and female organs on the one flower, it is sterile and does not produce or set any seeds.

Hemerocallis fulva How It Grows

Instead, it multiplies and spreads vigorously by underground long stolons, by growing 2 feet long rhizome runners of creeping roots set apart from the mother to the next plant. Let run wild it can pop up anywhere in your garden and can be a hindrance and take over your garden and form large colonies that may be hard to kill off. This is why I think it is best to keep this plant confined to a large pot sitting off the ground on bricks, this is how I grow it. Hemerocallis fulva daylily does not rebloom, it flowers for one time of the year for three weeks.

The hardy grower is the most popular eaten daylily used as Ancient Asian Herb. Eating edible daylily fulva has been on the Chinese menu for centuries. Buds, shoots and the young white roots are popular and have been cultivated and cooked in Asian food for thousands of years. You may find a cookbook or a website page online to find a suitable recipe to your liking to go by. If you are sceptical of eating daylilies for the first time, nibble on one or two, or just plate up and use them for decoration to enhance your main meals.

Hemerocallis Fulva is the variety cultivated and sold for hundreds of years at Chinese markets since ancient times, it was used to boost their income. The dried daylily buds had been displayed by stall holders as golden needles for selling, to be consumed by the public.

See How To Grow Daylilies In Containers