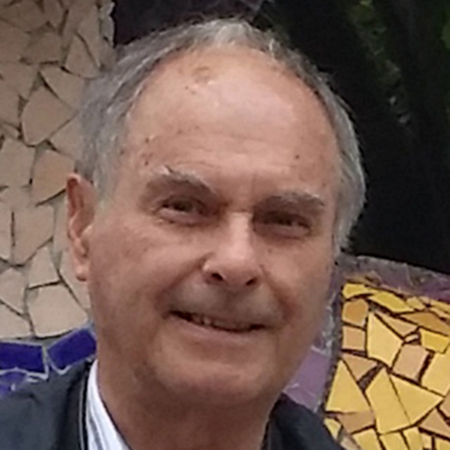 In the late 1980s Peter began ‘pollen daubing’, mainly as a hobby, but the interest grew, and so did the number of plants.

Some earlier varieties that proved to be good parents were Louisiana Iris Margaret Lee, Gladiator’s Gift, and Gatecrasher. Later, Extraordinaire, Garnet Storm Dancer, and Far and Away produced some dark seedlings. A ruffled creamy white, Snap Frozen, with its heavy substance and good growing habit have proved it to be a good parent.

For some years Peter worked on producing red varieties, and dark coloured iris.

In recent years, Peter has used some of his own seedlings as well as varieties from other hybridists to introduce new colour combinations, blends and spray patterns.

Blue iris are always in demand, so Peter has pursued this goal, as well as his success with other colours.

Introductions that have proved popular in USA in recent years are We Are Sailing (blue with spray pattern), Destination Robe (dark violet), Cute As (lavender) Blueberry Mousse and Hot Zone (burnt orange/red). In his hybridising Peter has endeavoured to produce something different, or an improvement in form.

While new introductions have been exported to USA (coals to Newcastle!), we will now be concentrating on growing for Australian growers.

Louisiana iris are sold by rhizome to replicate the original plant. The best time to re-pot and replant or dig and divide is from about February onwards in Australia. This can be done later, but plants left longer may not flower in spring.

Louisiana iris are easy to grow, relatively disease free, provided their two main requirements are met – they require neutral to acid soil, and must be kept at least damp, preferably wet.

If you have soil with high pH, the pH can be reduced using sulphur, and the soil will benefit with adding compost. Alternatively, given that louisianas are a water/bog plant they can be grown well in pots in water. However, unless they are grown in large pots, they may require re-potting annually.

Plant rhizomes with 2-3 cm soil covering rhizome. Can be mulched, particularly in hot weather. When planting, use compost, cow manure, and slow release fertiliser. If growing in pots, use a good quality potting mix with these extras.

After flowering in spring, cut off spent stalks (unless keeping seed pods), unless you want to plant and sow the seed.

Written by Peter and Pam Jackson.
At Decadent Daylilies Daylily Gardens, we have many new and earlier Iris releases from Peter Jackson’s breeding program for sale Here.